2022.05.28 - 2022.10.16
On May 28, 2022, BY ART MATTERS opens its second season with the group exhibition “Building and Dreaming.” Featuring works by more than 40 artists from China and abroad, including Matthew Barney, Bernd & Hilla Becher, Donald Judd, Yasuhiro Ishimoto, Liu Wei, Zhang Peili, Wang Jianwei, and others, the exhibition explores the relationship between artists and the art of building across artistic media such as sculpture, drawing, painting, photography, installation, and video.

“Building and Dreaming,” conceived by Francesco Bonami, director of BY ART MATTERS, and Wu Tian, deputy director, the exhibition is co-curated by Stefano Collicelli Cagol and Sun Man. The curators arrange these various types of artworks to interact with each other in their respective spaces, thus constituting an inherently organic connection and achieving a temporal transition and content articulation when visitors step into different exhibition areas; and also allows these artworks to set up a dialogue across time and space in the exhibition.

Mexican artist Mariana Castillo Deball's work, Who will measure space, who will tell me time (Gears)? embarks the viewer on their "dream-building" journey. This towering sculpture consists of multiple pieces of pottery fired using an ancient local technique. Dated in different time of production, the parts are placed at random to overlap a sense of time, disrupting the conventional linear narrative. Next to it is Phyllida Barlow's Untitled: Lipchitzplinth2013, at the exhibition entrance. The artist pieces together and gives depth to simple, everyday materials to generate an artistic vocabulary that undermines monumentality. 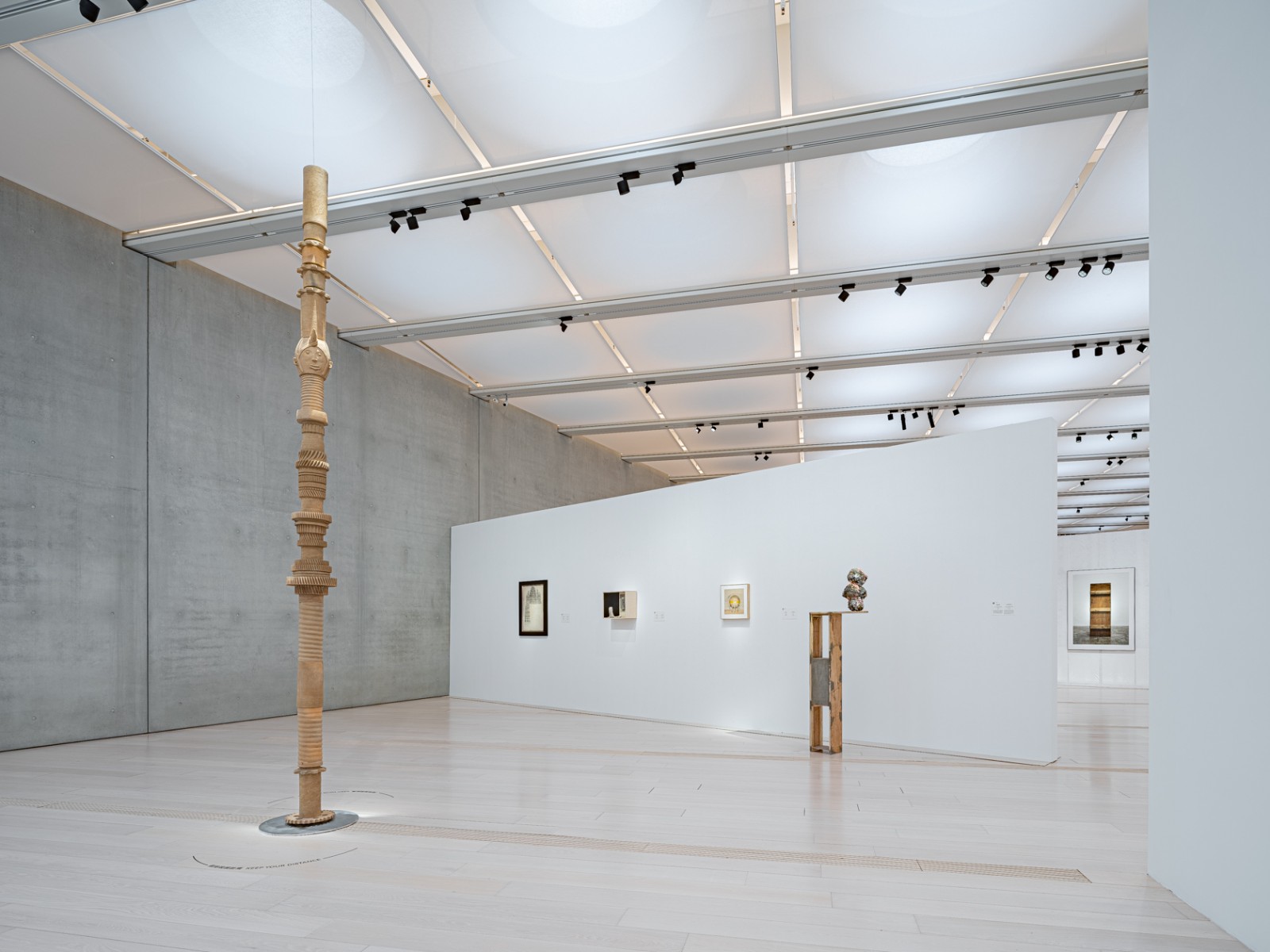 For many contemporary artists, the challenge of creating new media and contexts for existing readymade objects is one of the main focuses of the exhibition "Building and Dreaming." Wang Jianwei's series, ...the event matured, accomplished in sight of all non-existent human outcomes, and Liu Wei's 2015 sculpture Outcast addresses new order and meaning in deconstructing the objective matters. Untitled by the icon of minimalism, Donald Judd, consists of six rectangular hollow metal boxes that convey the artist's signature creative language of "stacks.” Japanese artist Kishio Suga, keen on employing natural and artificial materials, creates a new narrative through his art, materials, objects, and space in his work, where forms and materials engender a new language through correlation and iteration, and past art forms transform anew in the process of repetition.

Perspective and Temporal-Spatial notions transform in “Building and Dreaming.”

The labyrinthine exhibition space presents similar curatorial logic by interspersing various media and methods. The earliest dated works in the exhibition are selected from a series of documentary photographs of German water towers taken by Bernd & Hilla Becher over thirty years from the 1960s onwards, showing the connection between conceptualism and the process of industrialization. Yasuhiro Ishimoto's monochromatic gelatin silver print photographs of the Katsura Palace offer abstract forms of time and line. Zhang Peili's Tank, a watercolor-on-paper from the 1980s, presents a distant but realistic scene, while through Feng Yan's lens, the old furniture embodying memories of several generations take on a new order and story formed in their “building,” generating a new context. Such transformations of objective things shape new ways of artistic presentation. 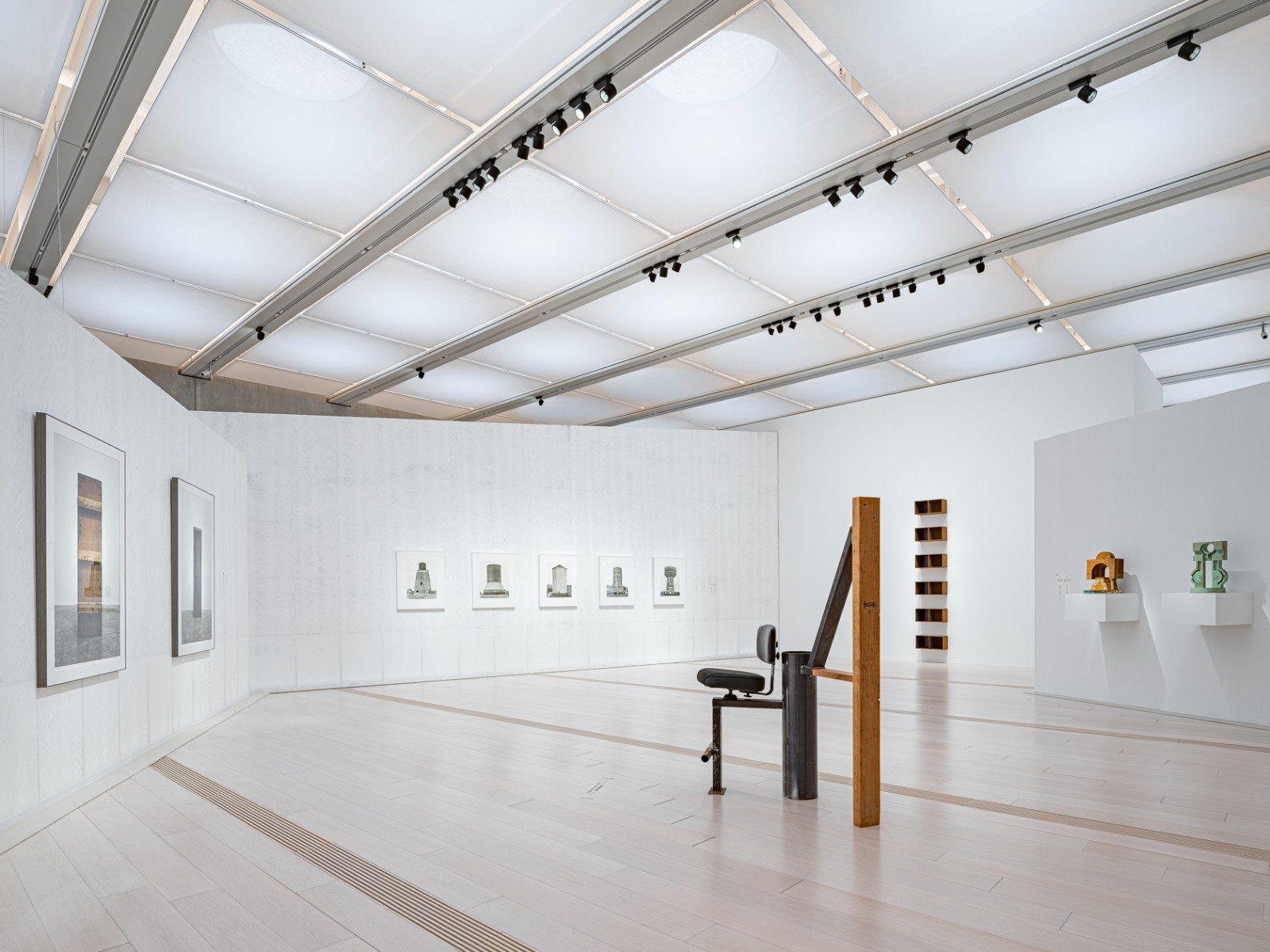 The transformation and interplay of time and space are interwoven throughout the exhibition. Matthew Barney's large-scale sculpture Crown Victoria is a destroyed Ford vehicle and a reincarnating body. This powerful zinc cast sculpture is derived from Barney's epic film River of Fundament, created in 2014. Inspired by the story of Osiris, the king of the underworld in ancient Egyptian mythology, through the protagonist's three reincarnations and rebirths, Barney intertwines his personal life story, the myth of ancient Egypt, and American industrial history. Lebanese artist, Mona Hatoum's Silver Ball, is a ball of white hair on a wooden plinth, an insignificant object that spans the length of the artist's life and unfolds the imagination of a long history. Mark Manders' "Architectural Self-Portrait" brings together clay sculpture, still life, and architectural structures in creating a dialogue between objects, language, and ideas in a delicate way, constructing a poetic expression that transcends language and time. Building with nature and technology, reality and imagination

Stepping into the dreamscape hidden inside the building, technology, nature, and imagination deliver a lightness. Ou Wenting's Mind-Wanderer shows a fluffy cloud hanging in the middle of the exhibition hall, from which a submarine periscope extends from the bottom, making people feel as if they are in the clouds and deep underwater at the same time. On the other hand, Adrian Nivola celebrates naive dreams in a series of improvised sculptures that pay tribute to pilots. And Takis' 1970s kinetic sculpture Signal explores invisible forms of energy such as magnetism, sound waves, or light waves as the fourth dimension of perception, closes the exhibition along with Mircea Cantor's video The Eagle Does Not Struggle to Catch Flies, which tells the story of nature's triumph over technology, drawing a powerful and poetic conclusion to the exhibition. 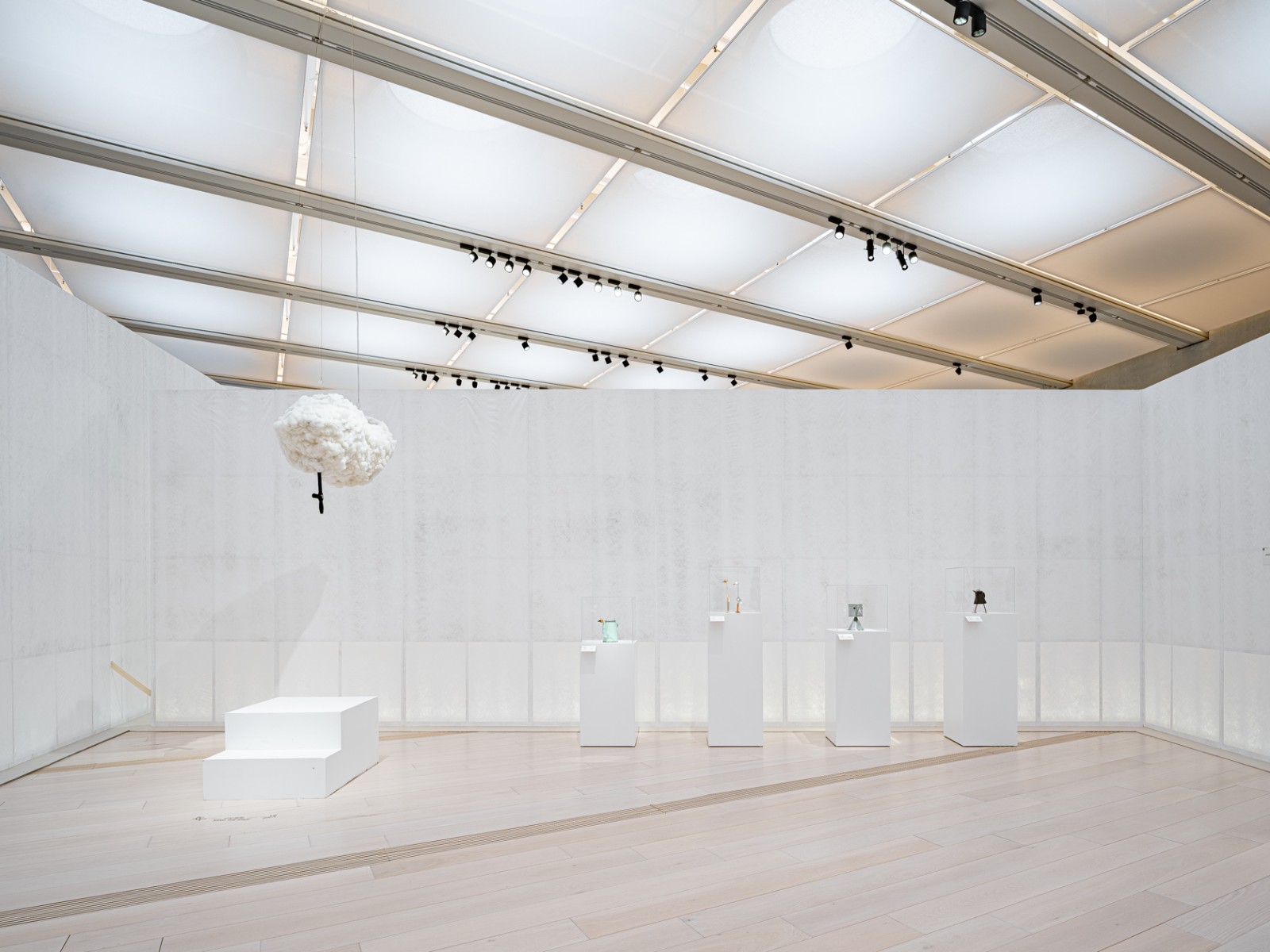 From the correlation and iteration between forms and materials to the gradually blurred boundaries between space and objects to the mystiques constructed by blending artistic media, the exhibition "Building and Dreaming" moves between the artists' rational constructions and sensible dreams, in the director Francesco Bonami’s words, “Art interweaves the measurable space of reality with the unpredictable world of dreams.” This exhibition is another way in which BY ART MATTERS - a "third site" outside of work and life and a "first classroom" for cultivating imagination - has made an effort to bring together and present many artworks from an unexpected perspective. 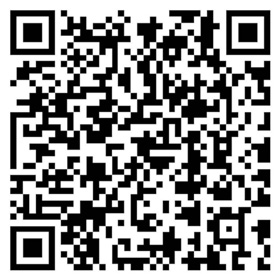